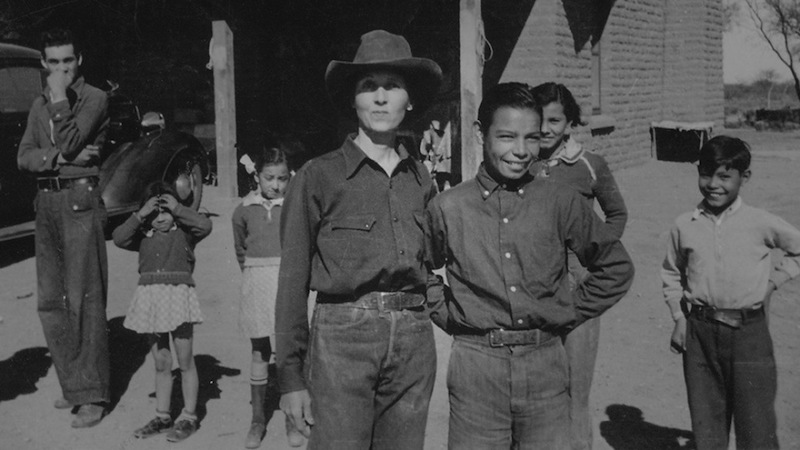 A teacher and an author, a rebel and a rancher, Eulalia Bourne is an icon whose stories are so fantastic that they almost seem mythical. In the 1910s she lost her first school teaching job in Arizona because she danced the one-step (think about what would have happened if it was the two-step!). At her second teaching job at a mining camp outside of Tuscon, Bourne asked her students (who didn't speak any english) to teach her spanish even though it was illegal to speak spanish at Arizona schools at the time. She explained: 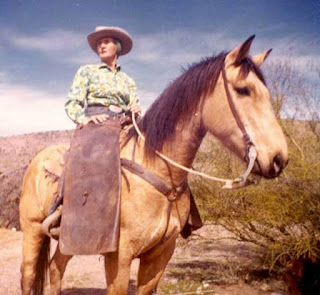 "They had a rule in Arizona at the time: no Spanish on the school ground. Not a word. I thought that was the silliest thing I ever heard. I determined that if I was to teach them, I had to be able to talk to them…[One afternoon], after the primary grades had been dismissed, I said, ‘0igan’ [Listen] I have been teaching you English all day. Now will you teach me Spanish? ‘Sure’, they said, so they began telling me the words for different things around the room. They told me about a hundred words and how they laughed when I missed one. But everyday we did that – they taught me Spanish for five minutes. It was wonderful.”

Bourne later received her BA in English with a minor in Spanish at the University of Arizona. She taught at other schools, raised cattle and built an adobe home, where in 1967 she wrote her first book, Woman in Levi’s, the first of four books. All royalties from her published work went to the Eulalia Bourne Scholarship fund at the University of Arizona. Chapters in Woman in Levi’s include: “Please Excuse the Pants,” in which she describes her choice to wear Levi’s—a decision that drew negative attention from her community. 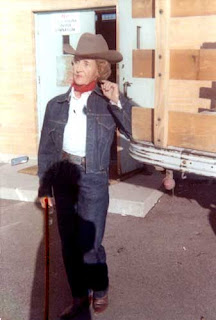 "I appreciated with regret the fortitude and charity it took to be friends with a nonconformist like me, a woman in Levi's… And I was not trying to make a spectacle of myself. I had nothing but business on my mind. With trade as my purpose I was not dressed to pass inspection by style-conscious bystanders. I was dressed for a long night ride in an unheated pickup. Nevertheless, there I was under the bright lights, sticking out like a finger-splint, jostling evening strollers and shocking one into ill-founded criticism.

A woman of practicality, empathy, Western pragmatism and dry humor, Eulalia Bourne was a woman who lived her life deeply and truthfully, no matter what people said or thought.
Email Post
Labels: 60s ICONS pre-1920s

Unknown said…
Thanks for sharing! She sounds like such a character I immediately went looking for her books at my library.
August 31, 2015 at 8:37 AM