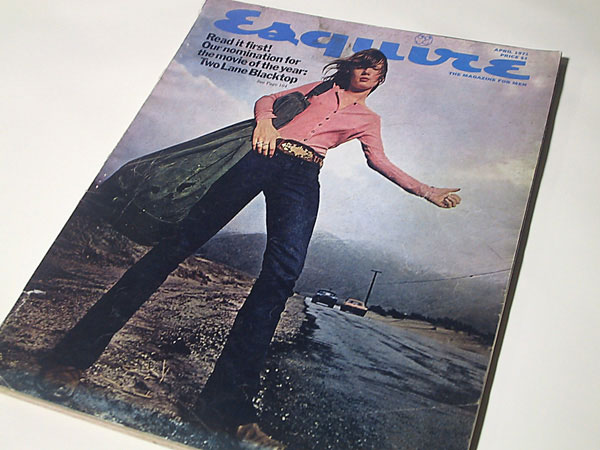 When I found this image of Esquire's April 1972 issue, I thought, wow, she's clothed. I'm so unaccustomed to seeing a woman on the cover of a men's magazine with pants and a shirt on that I was taken aback. Instead of complain about the current state of magazine imagery (for both men's and women's magazines), I thought it'd be better just to point out how incredible this image of Laurie Bird is and how great a cover it made. And Two Lane Blacktop, if you don't know, now you know.

Anonymous said…
Joni Mitchell accompanied James Taylor on some of the shoots for this film, they were boyfriend and girlfriend at the time. It was right around the time "Fire & Rain" was released, and Joni was already a big star. she later wrote "See You Sometime" about him.
https://www.youtube.com/watch?v=p_6W0c8o14c
March 8, 2015 at 1:30 PM

Alexis said…
Laurie Bird has a pretty interesting story. She eventually committed suicide by overdosing on Valium in the apartment she shared with her then boyfriend Art Garfunkel. At the time Art was finishing up filming Bad Timing, a movie about a girl who tries to kill herself from an overdose. I always found that to be very interesting. If you haven't seen Bad Timing it is a great movie.
March 9, 2015 at 12:02 PM