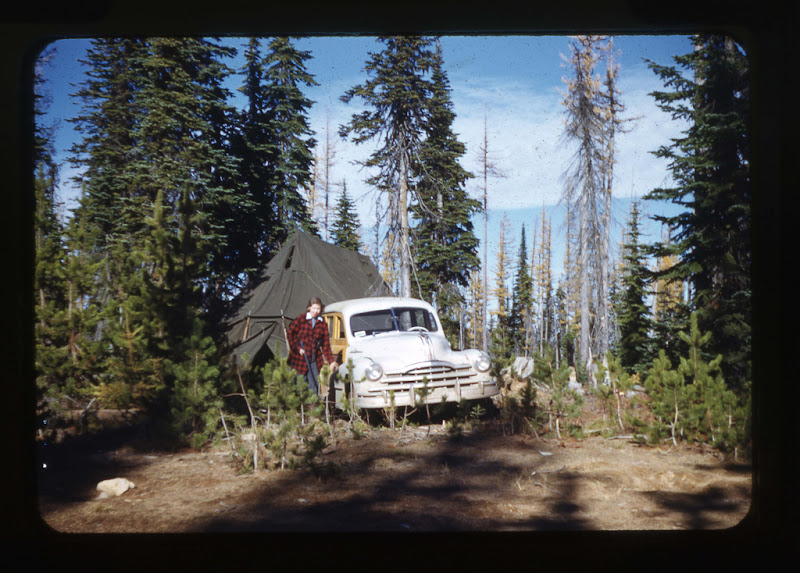 Photo of a woman and her 1948 Pontiac Streamliner woody wagon at Hardy Ridge, WA. in October 1949 via The Smithsonian Archives.

There are few more nostalgic symbols of Americana and adventure than the iconic woody wagon. From Ford to Pontiac to Chrysler to Oldsmobile to Mercury to Buick, it seems like every American carmaker was doing it. But when considering the timeline of the woody wagon, 1949 is the pivotal year for most automakers. '49 typically marks the last year that wood was used as a structural part of the car design; automakers in the 1950s and beyond instead opted for wood as a solely a cosmetic element, which then eventually led to vinyl ash framing or "wallpaper woodys". Cars are still manufactured with exterior wood design elements here and there (the Ford Flex aftermarket wood kit comes to mind), but I think the last great iteration of a wood paneled car was The Jeep Grand Wagoneer, which rolled out of Chrysler's Toledo, Ohio assembly plant for the last time on June 21, 1991. Cosmetic vinyl or not, that beast is a beauty. 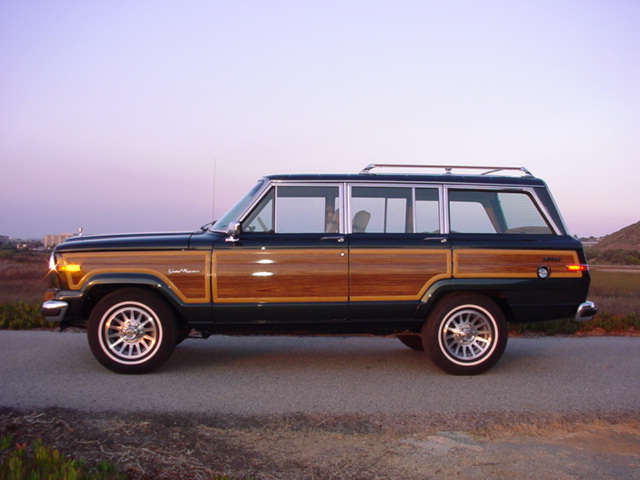 Here's the intel...but no word if it will be a woody!

Chrysler CEO Sergio Marchionne announced at the January 2011 North American International Auto Show held in Detroit, that the Grand Wagoneer name will be revived for an "upper-scale" 7-seat SUV, which he said would be introduced in 2013.[18] In February 2013, the Jeep product planning team took a research trip to Wagonmaster, a company dedicated to restoring and reselling classic Grand Wagoneers.[19] On September 2, 2013, Chrysler announced that they would delay production until 2015 to allow the Dodge Durango to find an audience, but at the same time will use the Grand Wagoneer concept as a basis for a full-size luxury SUV that would compete against the Cadillac Escalade and Lincoln Navigator, whose redesigns will go on sale in 2014.
January 21, 2014 at 7:14 PM

Unknown said…
I drove a '78 Wagoneer during the late 90's while I was in high school...it was my first car! I can't say I loved it at the time, particularly when the engine would flood in the school parking lot and I would have to wait around like a dope until I could start it again. It's nice to see it come back into fashion though!
January 22, 2014 at 6:32 AM

Poppy K said…
This place restores/sells Wagoneers - I compulsively stalk their site. I've owned a Wrangler and an old-style Cherokee but what I really covet is a Wagoneer. Maybe it's because when I was growing up my mom's dream car was a Chrysler Town & Country with the faux bois paneling - she must have put the woody bug in my head.

- abigail - said…
this is upper neat, thanks for sharing. I'd love to take one of these and dress like that gal and camp across the united states in the woods like that. that's like one of my ultimate dreams
January 22, 2014 at 11:30 AM

erin said…
My first car, in 1996, was an '85 Jeep Wagoneer. It was the perfect car for hauling around half the residents of my dorm building, car camping, and once for outrunning a gun-flashing thug. I sadly had to part with it because it would not pass smog in California. I still miss it...
January 22, 2014 at 6:52 PM

Unknown said…
I agree that there’s something remarkable about those woody wagons. They are a good reminder of how the car designs have evolved through generations, and it's not limited to designs alone. And I think it was in the 30’s or 40’s when the car manufacturers produced well-designed woodies. Regardless of the brand, the designs were all very classy.

Unknown said…
Aside from their tribute to car history, woody wagons are really unique! The design might not be very catchy for some, yet it speaks prominence. It has an aristocratic aura that makes it look respectable. Thanks for sharing!