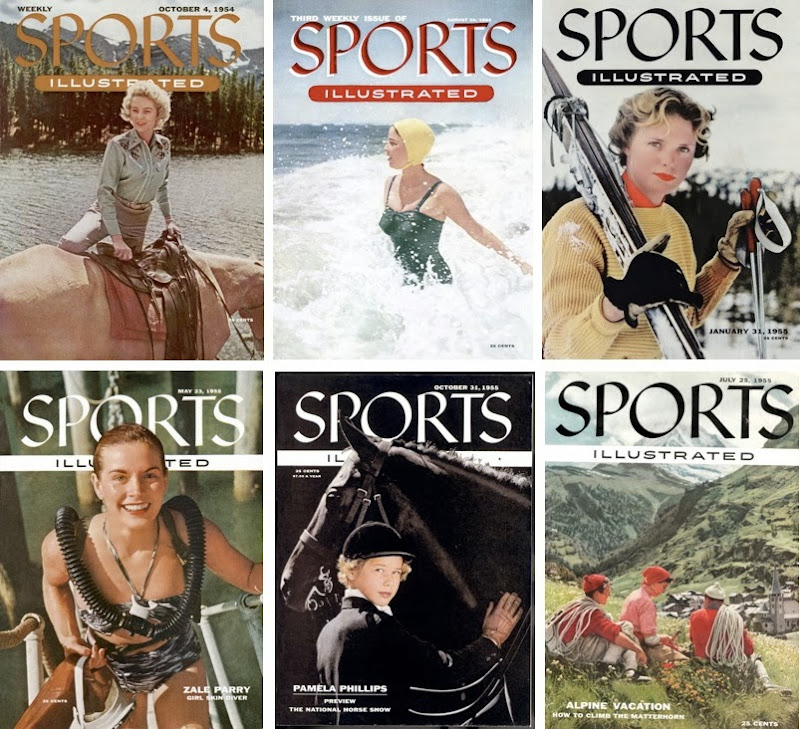 All of a sudden the 1950s are feeling mighty progressive. And with much more appealing art direction.

Molly said…
Better art direction is right! Thanks for figuring out the stats, too. Interesting.
October 15, 2013 at 6:54 AM

Lexie said…
I love your blog because you're always teaching me something new! It's wonderful. Although I'm not quite sure I like what I learned today! Come on, SI!
October 15, 2013 at 10:01 AM

L.P. said…
It's a sad day when the 1950s start feeling progressive, but I know what you mean!

Anonymous said…
Having been a teen in the 1950s, I'll let you in on a secret ...... it goes further back to the 1940s and even the 1920s. Remember Rosie the Riveter's face was a familiar part of the WWII effort. Amelia Earhart was most definitely a Tomboy and Kathrine Hepburn shocked the fashion world by wearing slacks and bragging about having been quite a Tomboy. In 1926, Gertrude Ederle became the first woman to swim the English Channel. She was followed three weeks later by Amelia Gade Corson. In 1945,Babe Didrickson Zaharias entered four PGA tournaments and made the 36 hole cut in three of them....against the men. Tomboy? I'm afraid that your sad commentary on SI today is due to the fact that sex is what sells today.
October 15, 2013 at 1:11 PM

MBA Bangalore said…
This comment has been removed by a blog administrator.
October 17, 2013 at 5:03 AM

Anonymous said…
Back in the 70's my brother used to get Sports Illustrated and he was allowed to rip off the cover and tack it to the beadboard ceiling in his room. I rememeber that SI used to cover so much more than the major sports - there were covers for chess, horse racing, swimming, track - and it was so much more interesting!
October 17, 2013 at 2:32 PM

Amielle said…
And look at us talking about equality now. I wonder how it devolved from then to now and also how we apparently haven't seemed to notice, or that we've said anything about it to really make them change direction.
October 22, 2013 at 1:50 PM