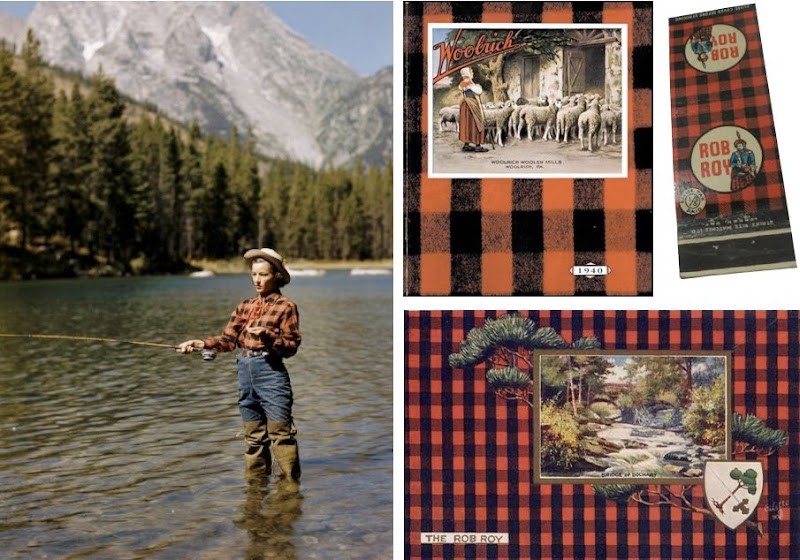 I love buffalo plaid. The classic red and black checked fabric symbolizes cold weather and being outdoors, hot chocolate, pine trees, Jeep Grand Wagoneers, and all that good stuff. It also conjures great American brands that have made it part of their signature like Woolrich, Ralph Lauren, and Pendleton. But Buffalo Plaid is not an American invention. Its origins lie in Scotland as the Rob Roy tartan of Clan MacGregor. One of the family's descendants, Jock McCluskey, who settled in Montana in the 1800s traded buffalo pelts (hence the name buffalo plaid) with Native Americans for heavy woven Scottish blankets made in the style of his family's tartan. Legend has it that both Sioux and Cheyenne warriors were in awe of the rich red color that was rumored to have been dyed from "the spirit blood and ghostly souls of McCluskey's prey and enemies", a belief McCluskey apparently did little to correct. Why is tartan called plaid in the US? Neither the Native Americans nor those living at the U.S. Army outpost could pronounce the Gaelic word for blanket, pladger, and instead referred to them as plaid. This is supposedly why Americans use the term plaid instead of tartan.

P.S. Woolrich makes an American-made Rough Rider throw blanket ($79) and a mean Buffalo Check Flannel Shirt ($59)—but I believe both are made without the use of spirit blood and/or ghostly souls. Happy Halloween!
Email Post
Labels: HISTORY

Emma Cornes said…
I love that an American classic has its woolly roots in Scotland. I'm Scottish and grew up just down the road from loads of the weavers, that to this day make amazing cloths. Long live plaid and tartan!
October 31, 2013 at 3:25 AM

Liam said…
I actually met one of McCluskey's descendents at Winter OR, and they're still making plaid woolens. Woolrich likes to claim they were the first to produce it, though. Hmm...
October 31, 2013 at 8:19 AM

Chelsey said…
Love this! I'm just down the road from the Pendleton Woolen Mill in Oregon and I'm going up to get some of their buffalo plaid to make pillow shams for our bed :).
October 31, 2013 at 8:21 AM

I found than one of his descendants, Gregor McCluskey, has a line based in CT called Braeval, but didn't see them producing anything with buffalo plaid (at least online). It's so cool that he's around though. Here's a link to his about page:

You're right. I thought all of Woolrich was produced here, but looks like that's not the vase. Here's a similar men's version that is made in the US from Woolrich:

Thanks for that link! I've been on the hunt for a great plaid flannel shirt, but it's almost impossible to find a classic plaid women's shirt. Most of the colors are pastel or have pinks/purples...I'm constantly envious of all the great menswear out there.
October 31, 2013 at 9:51 AM

Ruth said…
Just found a wool buffalo plaid LL Bean jacket, I'm guessing from the 70s, in my mom's house at Thanksgiving. I'm way excited, but having trouble figuring out how to wear it. The cut is big, so I can layer a sweater under it. It'll definitely go with me on camping trips, but I have to be brave about incorporating it into my "real life" wardrobe.
December 8, 2013 at 8:58 AM