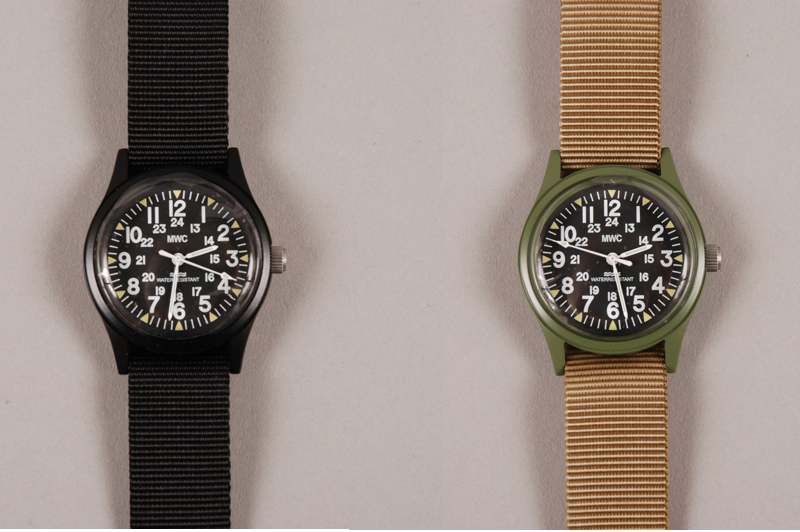 Military watches have always interested me. They're rugged, resilient, and typically inexpensive. I have a 1941 WWII era Elgin A-11 that is really fun to wear. At first glance it can be mistaken for a J.Crew Timex, but it's the real deal. Lately though I've been seeing the MWC (Military Watch Company) Vietnam re-issues here and there. My sister-in-law has worn the matte black one for years now (so cool!) and I have a guy friend that wears it as well. I've always admired the simplicity and utilitarian look of them.When I saw them popping up at stores like Steven Alan, I wanted to dig a little deeper.

The Vietnam War marked a major shift in the military watch. The earliest military watches were considered valuable items, only allotted to the highest ranks. Things changed gradually as watches became cheaper to manufacture. By the Vietnam era, the U.S. Military decided it would be cheaper to create and replace disposable watches than it would be to fix more expensive watches. Thus the Vietnam watch was born, a disposable plastic-faced simple watch. In 2010 MWC re-issued them in specifications that make them virtually indistinguishable in look and weight to the originals. They did however switch to all metal construction and upgrade to a stronger reinforced plastic, which means it's vastly superior in both durability and general quality. Not really disposable anymore. Win win.

Sarah said…
Despite this being my favorite style blog ever, I managed to miss the piece about Elgin watches. Six generations of my family lived in Elgin and my grandparents met at the watch factory (my grandfather was a watch engineer!)

I've been on the lookout for a great vintage Elgin for a while now, but perusing ebay is difficult when you live abroad... thanks fo this!
May 21, 2013 at 8:43 AM

Lizzie said…
@Sarah wow! That's incredible. I wish Elgin was still around, it would so cool to see the factory.

Rachel said…
Thanks for the links! I used to have a plastic olive drab Timex just like the Vietnam ones, and it was a sad day when the strap broke (I know I could probably replace it, but why not upgrade to something sturdier?).
May 21, 2013 at 9:25 AM

Sell Omega Watch said…
It quiet very useful post, thanks for it.