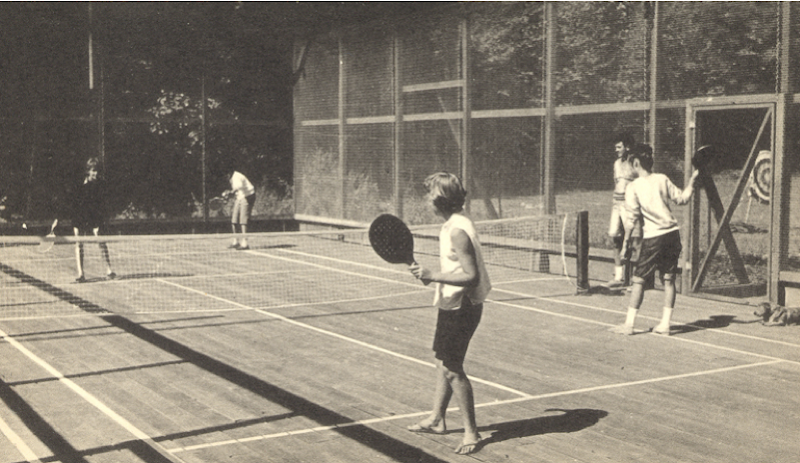 It wasn't until I started playing Paddle Tennis in L.A. that I realized there are actually two sports by the same name. There's Paddle Tennis, which is popular in Los Angeles among many other beach cities in the world, and then there's Platform Tennis, a similar sport, that many people call paddle—and is popular in the Midwest and on the East Coast. The differences are small and include court size and whether one may play the ball off the caged fence, but mostly the difference lies in the season. Platform Tennis is a winter sport played on a heated platform and often accompanied by hot cocoa, and Paddle Tennis is more of a sunny summer sport. Both games can be super fast and a great work out, but I have to say Paddle Tennis has become my most favorite sport. I play once a week in West Hollywood at Plummer Park (there's only one court there, so don't tell anyone), but the best public courts in L.A. are definitely at Venice Beach where you can watch some crazy games. I combed through a bunch of the history of the two sports and the best thing I came across was this quote from an old article from the USPTA:

"Unlike tennis players, paddle-tennis players like to dress down, perhaps because of the beach's influence on the game. And the strict etiquette that is required in tennis is almost completely ignored. [Players] are renowned for  screaming—at teammates—during matches. Tournaments get nasty—players have been known to purposely smash overhands at opponents' torsoes from point-blank range."

Maybe that's the reason John McEnroe likes paddle? Do you guys play paddle? If so what kind and where? reginag said…
That was indeed a classic move!

Anonymous said…
I live outside of Boston and play in a paddle league (Platform), but always thought the west coast paddle was just a form of tennis in miniature. I want to try it now!
February 5, 2013 at 8:18 AM

Anonymous said…
I never thought of Paddle as a dirty or agressive sport, I always thought it was for old people. But if McEnroe plays...
February 5, 2013 at 9:02 AM

Katie said…
Sadly, I had never heard of either sport. I live in the Detroit suburbs and looked up platform - turns out there are a couple places to play in metro Detroit but not near me. I love that you posted a link for McClure's though as they are a local Detroit company. :)
February 6, 2013 at 4:53 AM

Lizzie said…
@Katie you have to bring back Paddle Tennis to Michigan, the state in which the sport was invented!
February 6, 2013 at 9:23 AM

Amielle said…
I've never really heard of either of them but now I'm interested! An intense sport? Count me in! And those outfits are stellar! Especially that second top. Love it!
February 6, 2013 at 12:07 PM

blue roses said…
ahhh, mcclures has the best pickles as well, if you want to add a salty garnish to the bloody mary!
February 11, 2013 at 9:16 AM