Nylon watch bands have always interested me, they're an affordable and easy way of changing a watch's personality for a season or a vacation or, just an outfit. NATO bands, the standard watchstrap issued by the British Ministry of Defense, have the extra "keeper" strap to doubly secure the watch to the wrist. The official British military spec strap comes in only one color (Admiralty Grey) and one width (20mm), but of course they come in all sorts of unofficial varieties. 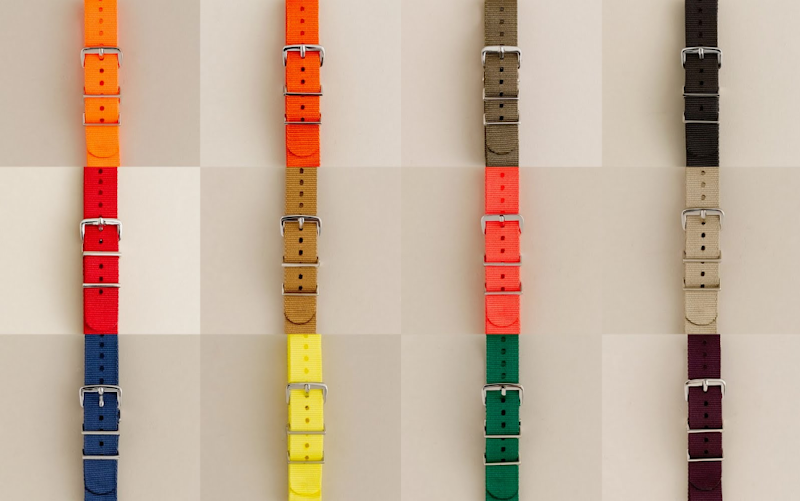 NATO bands have been covered by fashion outlets for years and years, often noting that James Bond wore one with a Rolex Submariner, but he wore a ZULU (no extra keeper strap). I didn't know this but Bond is also often incorrectly cited as wearing a black and grey band, when now with the advent of HD TVs, we know 007 was actually wearing this color scheme.

This week I've been seeing NATO bands everywhere. I combed through them at the Army/Navy Surplus Store, then pawed at the incredible collection of NATO bands at Los Angeles' posh vintage watch dealer, Wanna Buy A Watch on Melrose. They're also available at J.Crew ($20) among several other online sources, and just yesterday I saw the A.P.C. double NATO band men's bracelet ($50)—a purists absolute nightmare. But back to James Bond for a second. I was intrigued to find out that the only woman ever thought to have worn a men's watch in a James Bond movie was Pussy Galore in Goldfinger. More than that, one Rolex historian believes that there may not even be a photo of any woman wearing a 40mm Men's Rolex Sports watch that pre-dates Pussy's 1964 character. So the trend of women wearing men's watches just may have started with (or gained steam) from Goldfinger. Her watch? A Rolex GMT Reference 6542 (commissioned in 1955 by PanAm to help pilots keep track of multiple timezones), a real pilots watch, a watch many collectors today even call the Pussy Galore Rolex. And it looks like maybe she's got a NATO band on in that photo. That must be what Bond was getting at when he said, "You're a women of many parts, Pussy." 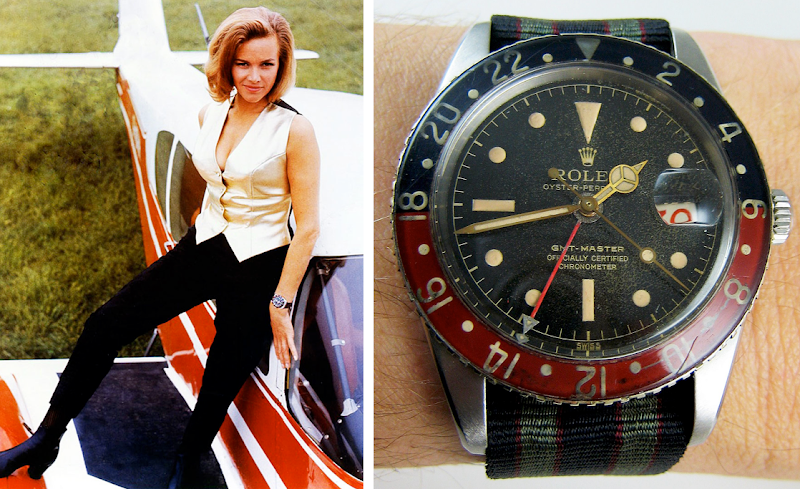 Amielle said…
I love all the different colours and the great little history piece you did there. I'm shopping around for a new watch and one that I can change the strap one is definitely looking much more appealing!
September 27, 2012 at 11:38 PM

Nomadic D. said…
Love all the color options. So fun! I've never had a nylon strap myself but it does sound refreshingly easy. Also, I just had to laugh at your post. Pussy just cracks me up.

Unknown said…
Colors always attract me and to make fresh hope for me.This fashion style look like 19th century.Remind me some awesome memories.Thank's a lot for sharing with us.
Current Fashion Trends

Julia said…
Oh these are lovely, especially the Rolex one - I'm just looking for a really simple, mannish watch. Thanks

Unknown said…
Yes, NATO on Ms Galore. I am a watch fan of many years owning G Shocks, Omega Speedy Pro, Seikos.
NATO and ZULU bands very popular and you don't lose a watch if pin comes out. Have to do your Google research. Quality varies from sellers.
April 7, 2015 at 1:00 PM

Unknown said…
I love all the different colors and the big little history part you did there. Thank's a lot for sharing with us.For more detail about Leather Watch Band & NATO Strap Visit Here.
October 29, 2015 at 11:57 PM