I have much respect for writers who can write about music. Using words to describe sound is really tough. So instead of commenting on Y∆CHT's newest album Shangri-La and the remixes with anything beyond "they're great!", I wanted to show you some of their incredibly smart and well-executed band merch.

Y∆CHT has really elevated the idea of what band merch can be. Some, (I'll count myself in that camp) consider it art.

A little bit from Claire on the subject:

We wanted to make a whole line of merchandise for this album, which we wrote and mostly recorded in West Texas before moving back to L.A., that really spoke to what Los Angeles means to us visually.

The neon sign installation ($600) and the lyrics poster ($20) are a way that we played with LA iconography. Two of the most classic visual associations with L.A. are the Dodgers logo (and the entire universe of that iteration all over the city) and posters made by Colby Poster Printing Co., a family operated letterpress that's been in business since 1946. We saw these as building blocks of visual culture in L.A.

The background to the lyrics poster starts with a guy in Marfa named Cowboy Joe who drives a decadent Cadillac with a rodeo scene painted on the body and horns attached to the grill. On the back of his car, in rope font, it says, If I can't go to heaven, let me go to Texas. We adopted it for the chorus of our song Shangri-La, which is a song about building your own utopia wherever you go and essentially feeling like heaven is a place on earth. It's very simple and earnest in that sense. 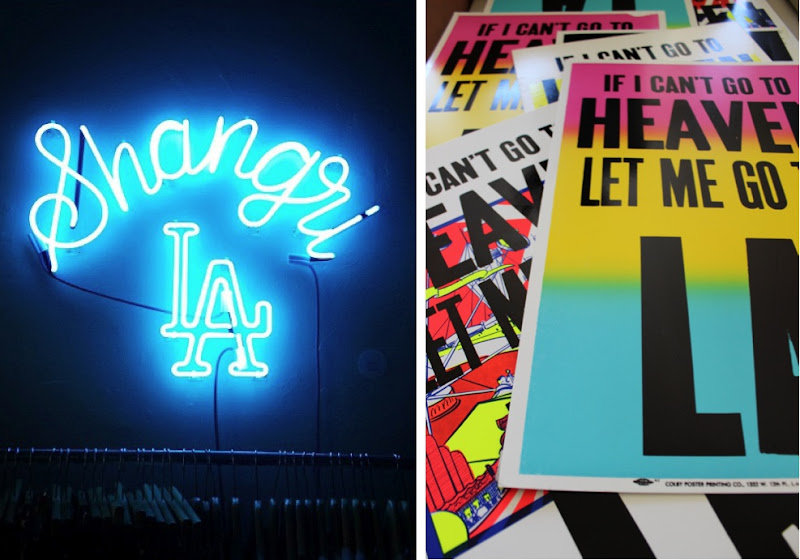 Y∆CHT merch can be purchased online here and in Hollywood at the newly opened Otherwild.

Fashion Territory said…
A wonderful post,..Everything just looks fantabulous ! Love the clothing!Love your sense of style...
July 18, 2012 at 1:12 AM

Katrina said…
I agree with your saying that using words to describe sound is really tough.
July 23, 2012 at 2:00 AM