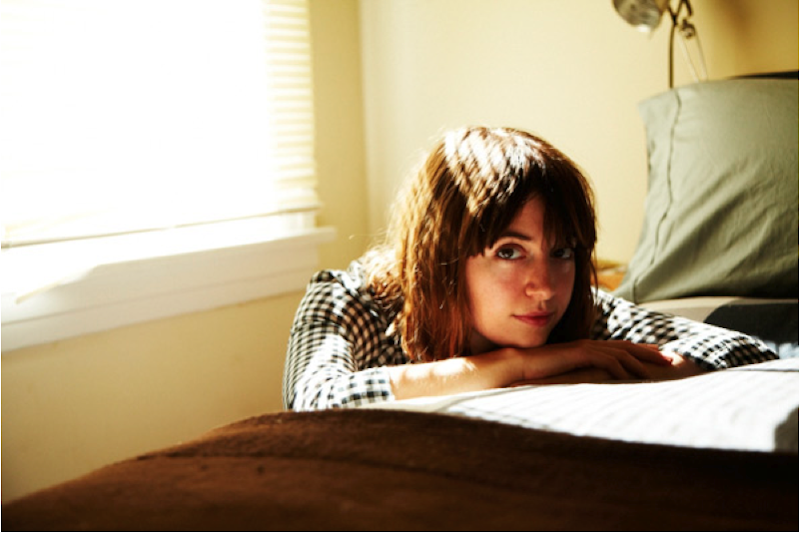 Photo of Zinzi in her home by Michael Flores via Refinery 29.

Zinzi and I went to the same teeny college, but we never crossed paths. Then we both worked in editorial at Bon Appétit Magazine, but she started just after I left. Years later we finally met, and have not really stopped IMing each other nonsense since. Zinzi not only edits the feature articles at FOAM Magazine, but she is one-half of the band KISSES whose freshman album is one of my top records of all time—not because we're friends, because it is so freaking good. Zinzi also has a great tumblr, At the Tree House and is a freelance writer. Basically, she takes pleasure in making all her peers feel unproductive in comparison. I'd hold all this against her if she wasn't so hilarious.

If not in Los Angeles, I would live in...Providence, RI, my hometown.

My dream holiday would be to...my summer house in southern Maine or Greece, probably! Someone take me to Greece, please?

Food: I can't stop eating pizza! I made an awesome brussels sprout/lemon/burrata number using a cast iron skillet technique the other night. So good.

Music: I just remembered how much I love Roy Orbison. So much alley cat singing.

Fashion: Bolero ties. I'm obsessed and I want one, like, yesterday. Also, peter pan collars—my mom just started a line called Arrowhead and she makes a pretty mean one.

Retail Store(s): I don't go shopping that much! But, I recently went to a CRYBABY presents opening at Space 15 Twenty. Not only is the shop stocked with everything one would need to be an extra-cool L.A. lady, but Dakota and Lisa who run it are total dream babes and the nicest.

I channel my childhood self when I...eat pizza and potato chips with unbridled joy, all the while pretending what I'm doing is completely normal so no one makes me stop.

The fictional character I most relate to is...Odysseus, nbd.

If I had to be outdoors all day I would...hopefully be wearing sunscreen.

My favorite quality in a man is...patience.

My favorite quality in a woman is...circuitousness.

If I could go back in time for one decade it would be...so alarming. No, maybe the gay 90s? I love gaiety.

As a teenager I was totally into...dying my hair red to look like Angela Chase and listening to the Foo Fighters and making things from Fimo clay!

I tend to splurge on...beauty products and food.

Stubbornly continuing to live my life as the oddball embodiment of everything I love...is what makes me have Tomboy Style.
Email Post
Labels: QandA

Aja Lake said…
oh my. i do feel unproductive in comparison.
and i also love eating pizza and potato chips with unbridled joy.
nice q+a!

Anonymous said…
tomboystyle takes a long time to load :( all the time. i don't have problems with any other site
February 22, 2012 at 6:23 PM

La Mode Operandi said…
Being busy with the things you love is the most rewarding ways to celebrate life!
February 22, 2012 at 7:17 PM

Unknown said…
Go Zinzi! This was really great. I love how you two followed similar paths in the beginning, but never crossed them until later. Serendipity:)
February 22, 2012 at 8:47 PM

julia wheeler said…
young Chevy Chase was a total dream boat, that pizza sounds delish and i can't wait to check out her album!
February 28, 2012 at 8:13 AM