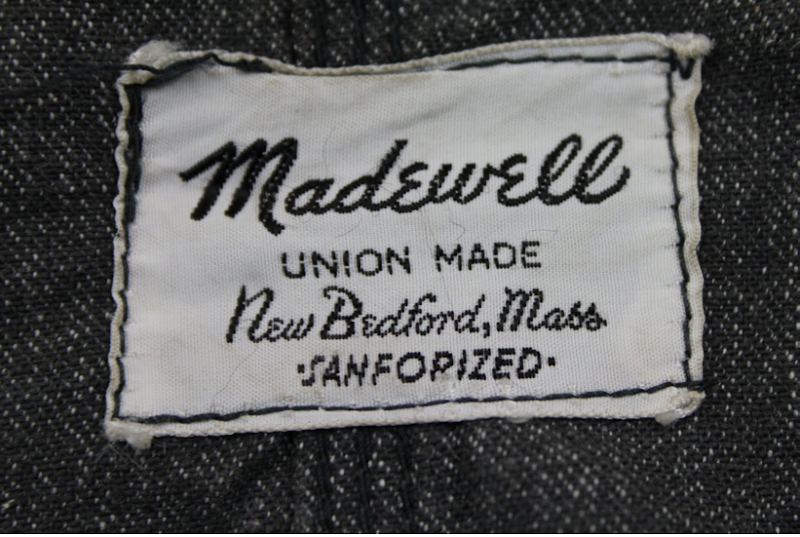 I had no idea that J. Crew's sister company Madewell had a storied past as an American workwear manufacturer. I was hiking with my friend Amy, a stylist, blogger, and native New Englander, when she started telling she used to wear Madewell back in the day. I scratched my head and said, "huh!?" In fact, the original company out of New Bedford, Massachusetts was indeed in business from 1937-1989. In 2006 J. Crew's CEO Mickey Drexler purchased the name and original typography and reinvented it from a men's brand that serviced tradesmen to a vintage-inspired women's retail destination. Amy was fittingly hired as a consultant to help design the Los Angeles outpost in 2006 and indulged me with a first-hand account of the original Madewell.

I grew up in Plymouth, Massachusetts and every year and the end of the summer, I'd take my lifeguarding money, jump on my 10 speed and pedal to a little mom-and-pop shop on Main Street called Cohen's. It was a tiny retailer that sold everything from men's work clothes to artisan pottery. All of us girls would go back-to-school shopping there because they carried high-waisted Madewell carpenter pants in white and denim and the iconic and super preppy Dean Fair Isle sweaters. I loved the little Madewell label above the back pocket and of course, the loop for holding your hammer, if need be. My secret trick was actually to try and buy a pair in the middle of the summer too and start wearing them in order to age them down just-so for day one back on campus. You can't imagine my surprise and the wave of nostalgia that came over me when I learned Micky Drexler was reinventing the brand. I was hired to source goods for the first Madewell store in Los Angeles and when Mickey Drexler came through to do a walk-through before the opening I told him of my long relationship with Madewell—he was thrilled! —Amy Keller

Fern said…
I generally like Madewell clothing, but find it quite sneaky and sort of off-putting that J. Crew bought the brand and is acting like the company as it is today has existed "Since 1937". Not a fan of how everything is made in China/Asia, but their rail straight jeans are my favorite.
November 1, 2011 at 8:46 PM

Nomadic D. said…
I had no idea of the Madewell history! So interesting, thanks so much for enlightening us!

Kelly said…
I completely adore your blog. I thought I'd let you know! I spotlighted your blog in my post today.

Melissa said…
Agree with Fern that it's a bummer everything is made in China now, doesn't that sort of do a disservice to it's history? How cool would it be if everything were made in the U.S. and literally made well.
November 14, 2011 at 3:30 PM

Tailoverteakettle said…
While I lust after Madewell constantly (and guiltily own a few pieces myself) I wish they were still making clothes out of MA instead of China. Sad.
November 23, 2011 at 5:54 PM

Edie Jams said…
I generally like Madewell clothing, but find it quite sneaky and sort of off-putting that J. Crew bought the brand and is acting like the company...........