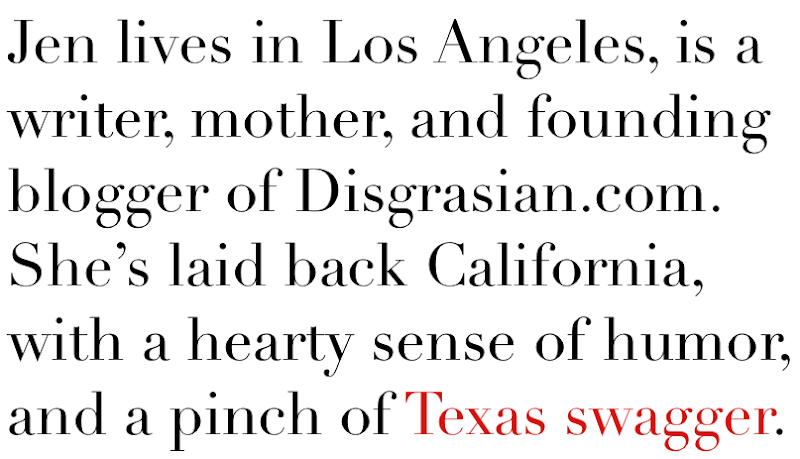 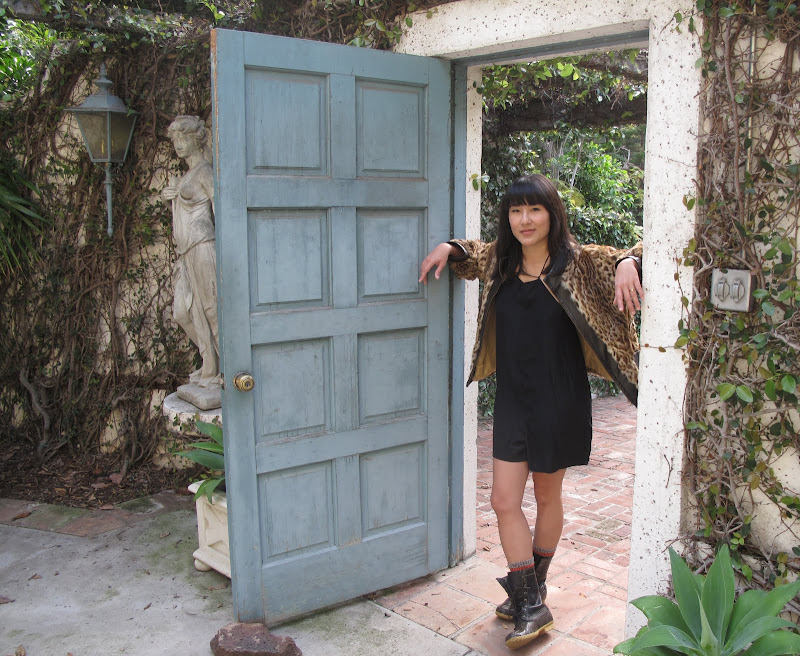 Photos of Jen in her home by Tomboy Style.

As if Jen already didn't have the coolest tomboy duds, from plaid A.P.C. dresses to vintage fur jackets, to her L.L. Bean Signature duck boots, she also has the coolest house too! Damn you Jen! Today we hung out at her beautiful Spanish Revival and played with her dogs Murray and Chifa, and shot the breeze. When she's not playing tractors with her 2-year-old son, you'll find her representing her blog Disgrasian on a segment of Nightline, weighing-in on the rise in Asian models in fashion.

If not in Los Angeles, I would live in...Point Reyes. I'm a horrible cliche! The city dweller with the country living fantasy despite lacking any discernible country living skills. In that fantasy, I farm oysters in Tomales Bay and make pickled things.

My dream holiday would be to...go on a SpaceX flight whenever they nail down the technology (and I get an unexpected windfall of cash from my oyster and pickle business). My father is a physicist and consulted for NASA; I've always been fascinated by space exploration. And space suits! My dream space suit would look something like those gold ones in Danny Boyle's Sunshine.

My current obsessions are...eating the linguine and clams at Son of a Gun, red snapper sushi with salt and lemon, grits, oysters from Prince Edward Island, drinking root beer floats; listening to (this is kind of embarrassing because it makes me sound 100 years old, but) KUSC Classical Radio while driving—makes me ever so slightly less aggro on the road.

My current fashion obsessions are...Carven dresses and coats, vintage Missoni (after I failed to score anything from the Missoni for Target sale); Pendleton, and the Pendleton-esque Isabel Marant stuff; antique Oaxacan "Frida Kahlo" earrings; Falke Cotton Touch tights in black; The 80's Chloe black lace dress I bought on eBay 10 years ago that I aspire to fit into again. And, weirdly, fleece. Surface to Air made an over-sized fleece peacoat this season that makes the wearer look like a giant teddy bear, and I covet it.

I love to shop at...Sweet William. It's a children's boutique in New York. They carry the cutest children's labels, like ESP no. 1, which makes the perfect slim-yet-slouchy jean. I only wish those jeans came in adult sizes!

I channel my childhood self when I...watch football. I grew up in Texas, and football was king. Whenever I watch football, it's like I'm ten years old again, overly invested in winning, and easily heartbroken. 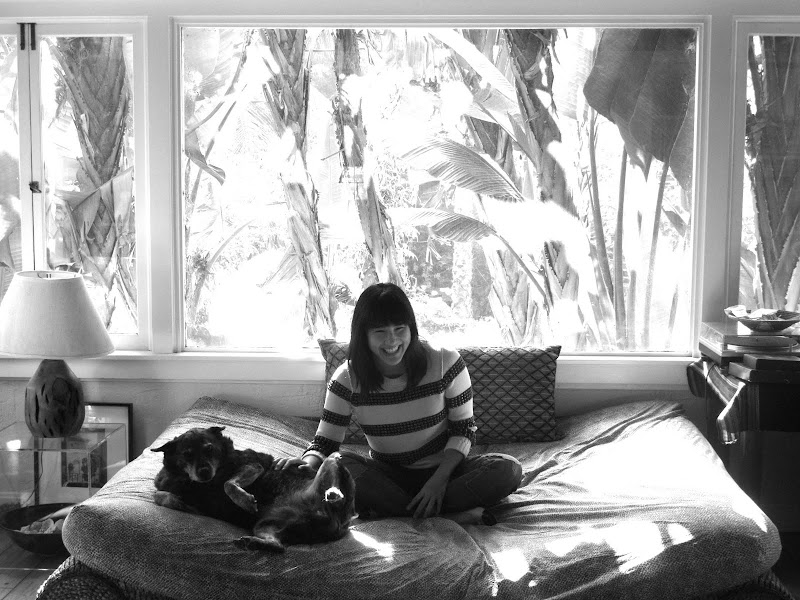 The fictional character I most relate to is...Hmm. This is a hard one. I guess if you, like me, don't believe the Bible is literally the word of God, and count it more as fiction, then I'd have to say Lot's Wife. She looked back. She wasn't supposed to, but she did. Out of curiosity? Defiance? Regret? All of the above? I relate to the idea of doing something you know you're not supposed to do even though it may have terrible consequences only because, in one tiny moment, you're weak or stupid or you have a mental lapse.

If I had to be outdoors all day I would...be on a beach, combing the sand for shells and rocks. Someone close to me once called it my way of "shopping on the beach." Which is embarrassing but true.

My favorite quality in a man is...a lack of self-consciousness. Not embarrassing easily. Basically the opposite of me.

My favorite quality in a woman is...rage. Not pissy, petty, shapeless rage. But rage that's directed at something fucked up in the world that she wants to change.

I'm terrified of...birds. When I was little, I'd bike to elementary school along this street of nice houses lined with mature trees, and I'd frequently see dead birds on the ground, as though they'd just fallen out of their nests or something. Birds have represented the thin line between life and death ever since.

My celebrity crush is...Connie Britton. She played Tami Taylor on Friday Night Lights, and currently she's in American Horror Story. I feel like the adult female population is evenly divided between girls (like me) and women, and Connie Britton is all woman. The way she calls people "hon" makes my knees weak.

My beauty product of choice is... Jurlique Herbal Recovery Night Mist. I spray it on after I put on my makeup. When you're in your 30's and live in a desert climate, "dewy" doesn't come naturally.

If I could go back in time for one decade it would be...like, '65-75? Just to see the best rock 'n' roll of our time live. The Beatles, Bowie, Led Zeppelin, The Kinks, Velvet Underground, Bob Dylan.

As a teenager I was totally into...church camp and electronic music. It's hard to explain in a short Q&A, but only in Texas, I tell ya.

Despite the fact that I'm into clothes and pretty things, I'm kind of a dude. I'm into dude things like sports, beer, whiskey, video games and hanging out with other dudes doing dude stuff, so I guess my dude-osity...is what makes me have Tomboy Style. 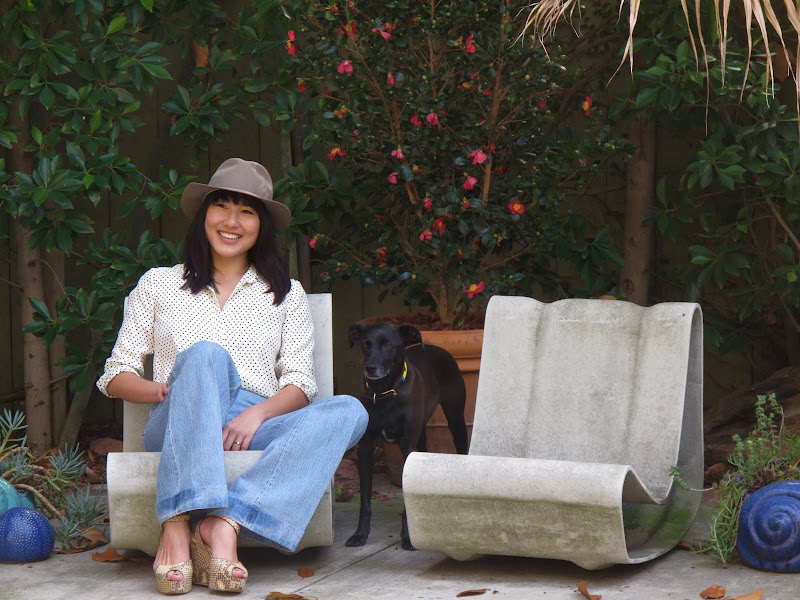 gluttonforlife said…
She's so brilliant and original I'm almost too shy to claim her as a kindred, but I will anyway...
October 20, 2011 at 6:06 AM

Anonymous said…
Just had to say that I love the blog, especially the interviews—and have you seen this photo of Anjelica Huston? Amazing tomboy style.
October 20, 2011 at 6:50 PM

julia wheeler said…
those platforms in the last photo are amazing. i wish real life came with room service too!
October 20, 2011 at 9:46 PM

Lexie said…
what a great answer for the fictional character.. what a great interview! and AMEN to connie britton being all woman! i try and channel her in the classroom, ha!
October 22, 2011 at 2:10 PM

raibklyn said…
In case anyone here is interested the major shareholders in LL Bean are funding sexist and homophobic causes. You should not buy anything from LL Bean!
October 23, 2011 at 3:38 PM

jennifer said…
Thank you for featuring Jen Wang. She seems like such a cool, smart person (with kick-ass style) I love Disgrasian and think that Jen is an amazian!
October 24, 2011 at 4:33 PM

sweetbugfarm said…
This is one of the best. Wish I lived closer to Jen and her pizza baking friends...or maybe soon we can shuck oysters and drink whiskey in Pt Reyes! Girl, you rock!
November 1, 2011 at 6:44 PM