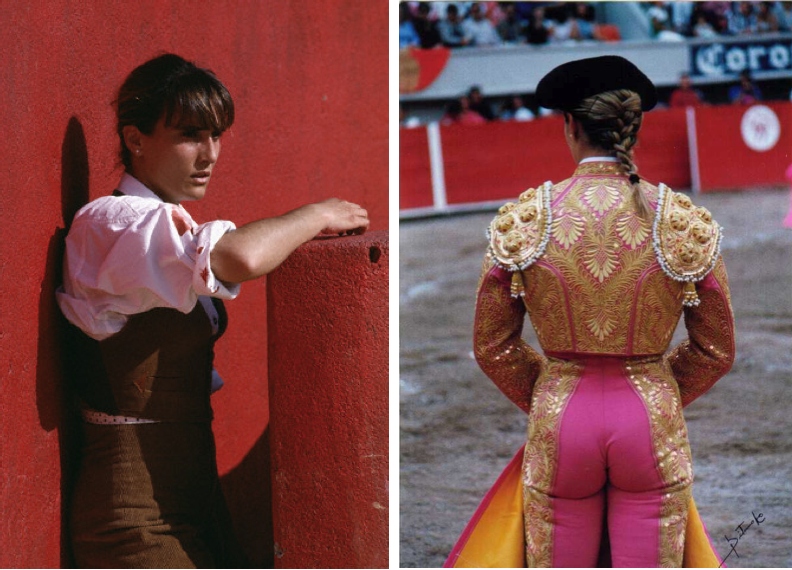 Photo of Spanish bullfighter Christina Sánchez in Spain by Diego Goldberg, 1992; via Who's Who.

I've been to a bullfight and have to admit I found myself rooting for the bull. It's not a sport I would endorse, but at the same time I don't feel (as someone unfamiliar with the subtleties and traditional importance in its culture) it's my role to place judgment. All that aside, this woman is totally fearless and I'm in awe.
Email Post
Labels: 90s ICONS

Jorie said…
It's barbaric whether it's culture or not. We seem to have no problem condemning cock fighting and dog fighting because that's not part of a culture of light-skinned Europeans.

Meg said…
Yeah, not a fan of bullfighting at all. It's not even a fight, because the bulls are at a disadvantage from the moment they are put into the ring.

Anonymous said…
Christina Sanchez is an icon. Besides, doing what you love and not caring what anyone else thinks is the very definition of a tomboy.
September 30, 2011 at 11:13 AM

Meg said…
"Besides, doing what you love and not caring what anyone else thinks is the very definition of a tomboy." - So ignorant. Animal cruelty is never acceptable. Some of the coolest tomboys (Joan Jett, Ellen DeGeneres, Sinéad O'Connor, Chrissie Hynde) care greatly about animal welfare.
September 30, 2011 at 11:17 AM

Matt said…
I can appreciate her incredible tomboy style without condoning her choice in profession. I think this is a point that the post made as well.
September 30, 2011 at 11:43 AM

Lizzie said…
One of my goals with this blog is to document the shared tomboy experience throughout the world. I'm personally against the politics of this sport, but it is undeniable that the sport exists and there is a storied and intricate subculture tied to it. In my quest to be respectful to another culture, I fear I have offended others and I regret that.

I was trying to focus on a woman who held her own (and them some) in an ultra male-dominated sport. Perhaps it's impossible to separate that from the politics of the sport, but that was my intent.

TROI said…
Americans need not be imperialists that tell every other country what is right and wrong. We all saw how well that went in Vietnam and Iraq. We all have our own values and this is a surely a good one to have, but this country gets into trouble time and time again when we decide our values should be the world's values. I don't think Lizzy needed to clarify, I think everyone that's outraged just needs to think a little harder about what she said.
September 30, 2011 at 2:00 PM

Anonymous said…
"The test of a first-rate intelligence is the ability to hold two opposing ideas in mind at the same time and still retain the ability to function." —F. Scott Fitzerald
September 30, 2011 at 2:10 PM

Anonymous said…
Lizzie, you have an awesome and unique fashion blog, AND you're smart. That's why I'll be a lifelong reader! Keep your posts coming. :)
October 1, 2011 at 2:12 AM

Anonymous said…
It's about tomboy style, not the bullfight. Should we then omit anything that, when considered in a different context (which is entirely subjective), stirs emotions? It's an image. Look at it from a different angle. I vote "epic."
October 1, 2011 at 2:19 PM

Kate said…
Well said, TROI. I don't encourage animal cruelty either, but this post isn't really about bullfighting itself; it's the fearlessness of the woman in the photographs.
Keep up the great posts!

ASL said…
how is this different than bogart/bacall catching that fish?

how is this different from those of us who eat eggs...meat?
wear leather, makeup?

Amy said…
Susan Orlean wrote a profile of her in Outside years ago - called The Bullfighter Checks Her Makeup.

She also named her published collection of profiles after the story.

Em said…
You've hit upon something huge here. Bullfighting has been a male-only profession for hundreds of years. The traditions behind it date back to feudal Spain where it served as proof of masculinity (something about the phallic nature of impaling an animal). Furthermore, the matador holds the most prestigious position. They arrive last, on foot with the typical red cape to finish the spectacle. The U.S. equivalent would be a woman playing quarterback for a successful NFL team.

Anonymous said…
Please do not compare fishing or even hunting with bull fighting. Torturing an animal for 2 hours and aplaude it is unacceptable. And I don«t care how cool she looks when she spikes a animal in a closed arena.
October 5, 2011 at 11:47 AM

Anonymous said…
catching marlin: first catch a bonito... next, attach the hook through the eye socket of the bonito, which will allow the fish to stay alive for several hours. After you hook the marlin, you're in for a fight. If the line seems tight, give the fish more line. If you don't correctly judge the tension, you will probably lose your big catch. The marlin can hold up for long periods of time, so endurance is vital. Once you win the battle and ...
October 9, 2011 at 5:59 AM

tintin said…
I grew up watching Mexican bullfights on El Paso TV when I was 6 and 7. I've read everything I could find about it, which isn't a whole lot in this country. And I've been to a couple fights.

I understand Sanchez quit fighting because of the way she was treated in Spain by other matadors and by the spectators. They did not like the idea of a woman doing what only a man should do. That's what's really sad.

Bulls are bred for the sport and live mostly without any sight of man. They're usually brought to the fight at two. And the best have been pardoned and are retired.

There is a beauty to it. The tradition. The spectacle. Even the celebration. It's hard to describe but it's a whole let less vulgar than watching NASCAR or professional wrestling and I admire the Spanish and their culture while I abhor the rapid decline of my own country.

Blood drips from your children's teeth as they bite into another Happy Meal from McDonald's. Sorry, got carried away there.
October 11, 2011 at 2:32 PM

Paula said…
Please don't call this a Sport. Whether you like it or not I recommend to read a little on the subject so you know what you are talking about before condemning it... I've attend to many many bullfight in order to get my own experience and opinion and it is a total display of ignorance to call this a sport, it is a ritual. Besides, the aesthetics of a bullfight are so amazing it becomes overwhelming experience.
October 12, 2011 at 1:43 PM