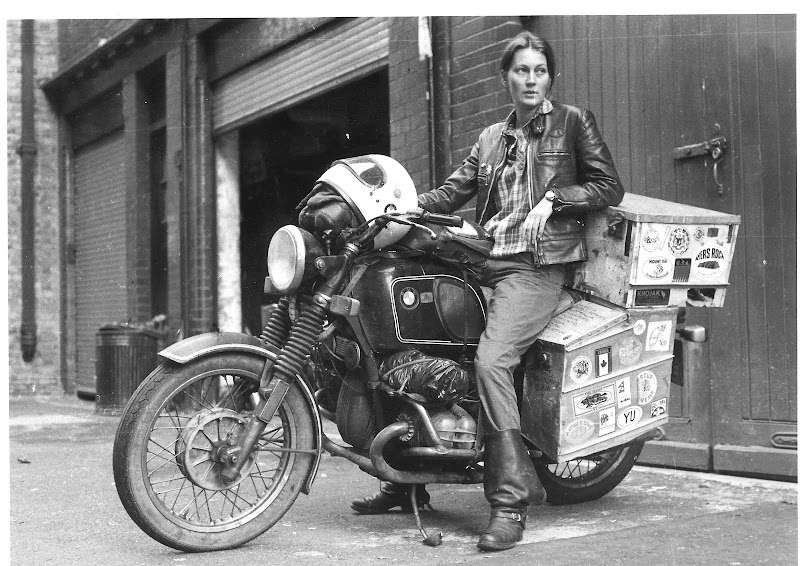 Photo of 24-year-old Elspeth Beard in London after completing her solo ride around the world on her used 1974 R 60/6 BMW in 1984 via Motorcyclist Online, found via Mary Caple.

Her first bike was a Yamaha 100 and she soon graduated to a Honda 250. She found that useful for nipping around London but, after a while, felt the urge for something more macho. "I worked for months in a pub saving the money to buy my BMW 600," she says. "That gave me the bug for travel on a bike. It's the best way to get around - cheap, efficient and I enjoy the freedom."

When she finished her training to become an architect, Elspeth wanted a taste of adventure before settling down, and decided to ride round the world. She shipped the BMW to New York where she picked it up and rode to Canada, then to Los Angeles, before putting the bike on a ship for Sydney.

Once reunited with her BMW, she rode across Australia to Perth, where the bike was placed on a boat again, this time to Singapore. From there she rode north through Malaysia and Thailand. "Burma was closed to me," she says, "so I rode back to Penang and put the bike on a ship to Madras."

The next stop was Calcutta and her route continued to Katmandu, Nepal and thence to Pakistan, Iran, Turkey, Greece and back home through mainland Europe. The trip, covering 48,000 miles, lasted nearly three years - and wasn't without incident. —Kenric Hickson in an excerpt from Typical biker: Elspeth Beard.
Email Post
Labels: 80s ICONS

Olithée said…
Im a huge fan of this photo.
Thats nothing but history.
This girl, got it all

Aurealious said…
its great to see another Elspeth doing something inspirational! Thanks for sharing, Love the Blog!
-Elspeth
May 26, 2011 at 6:16 AM